Tam Smith passed away 13 July of this year and was laid to rest in Blaeberry Cemetery on Wednesday 27 of July. Tam was Whitburn's Honorary Life President and had been President, kit man, groundkeeper and general handyman about the club for many years. Perhaps most people's abiding memoery of Tam was of him running about after the ball when it left the park - and in those days there was no gate in the South Enclosure. He is survivedby his wife Irene who was present at the beginning of the Arniston game where his life was celebrated by a minute's clapping. Good bye old friend and rest in peace. He is shown in the picture below left in happier times giving Dewi Taylor his player of the year award for season 2015/6 and in 2003 on the right.. 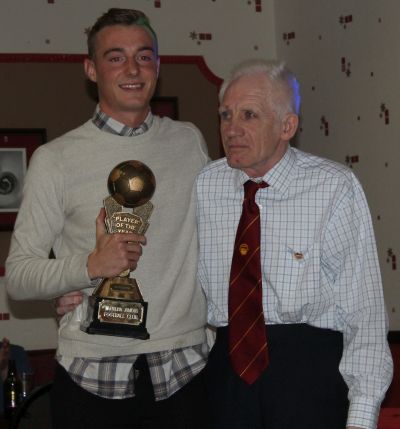 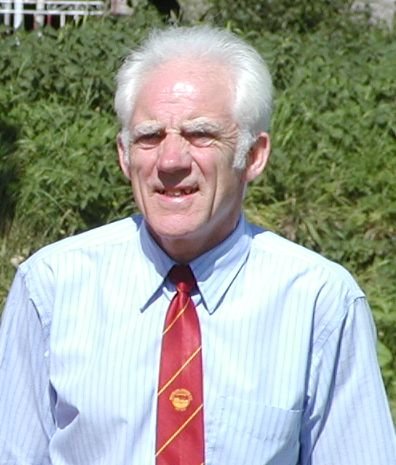 Bob Malcolm said it all in his response to the sad news: "I was saddened to hear of Tam Smiths passing . My friend,pal and fellow past member of Whitburn Juniors committee . I remember Tam joining in early 1991 and I was there when he left after many years of work and lots of laughs. I even remember Tam in his younger days with the Amateur team and when he tackled the ball was usually not involved lol . Tams mother washed the strips on a regular basis. Tam and I had some great times together hauling the gear around the region for games, cutting grass yes and thousands of other jobs that get the team on the park . The lottery and raffle on the Saturday night some times was extremely funny when Tam would have little impromptu dances . Yes Tam happy days and I will miss you terribly but now I know you are in a better place god bless."

Some players joined in the Gala Day to celebrate the league win and show off the trophy they won so well. Hopefully might inspire a few more spectators for the coming season! 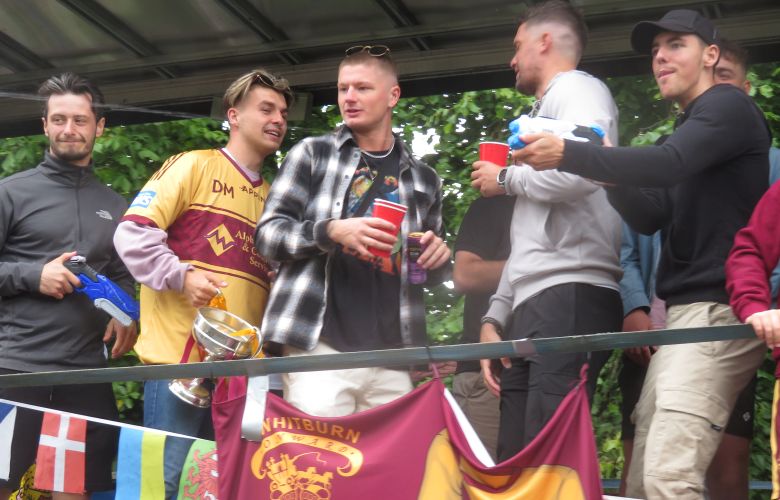 Sponsorship is now closed as all the players and the management team have now been sponsored. A fantastic effort and many thanks to all sponsors whose names will appear later on the squad page.

The cost of a season ticket for the coming campaign will be £75 and £40 for concessions. This allows entry into all home league games.

A number of pre season friendlies has been arranged. More details such as kick offs to be provided when fully confirmed but we will play St Cadocs at home on 2 July, Bathgate away on the 12th, at home to Leith Athletic on the 16th, the 19th sees a visit from Lothian Hutchison Vale and finally away to Whitehill Welfare on the 23rd!

...Whitburn will be playing in tier 8 of the Scottish football pyramid - Division 2 of the East of Scotland football league. It will be a well travelled, long and competitive league as our opponents will be: Arniston Rangers, Craigroyston, Dalkeith Thistle, Easthouses Lily MW, Edinburgh South, Edinburgh United, Hawick RAU, Heriot Watt University, Lochgelly Albert, Newburgh Juniors, Ormiston, Peebles Rovers, St Andrews United, Stirling University EoS, Syngenta, Thornton Hibs and Tweedmouth Rangers. Whilst half of the teams are old rivals from the days of the juniors, the other half are pastures new such as Tweedmouth, Peebles and the two University teams. Exciting days ahead!